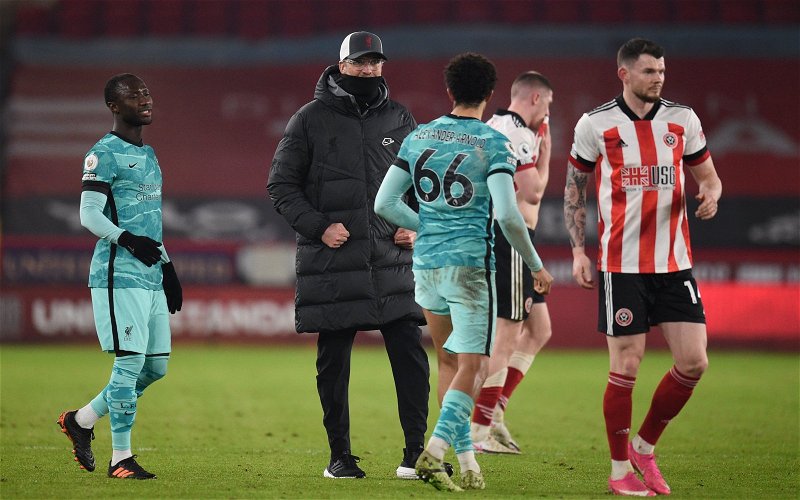 Football journalist Dean Jones has been sharing his thoughts on the current situation at Liverpool concerning the potential relationship between manager Jurgen Klopp and owners Fenway Sports Group.

This comes after Jones made an appearance on a recent edition of Touchline Talk where he spoke about a range of topics concerning a variety of clubs.

Liverpool have not been too active in the transfer market this summer, with Ibrahima Konate their only major addition so far. Meanwhile, the likes of Manchester City, Chelsea and Manchester United have all either already spent big or are expected to do so – leaving Jones perplexed as to why the Reds have seemingly not been given the go-ahead to match their rivals’ spending sprees.

On the subject of Liverpool and the backing that Klopp currently has from FSG in terms of spending money on new transfers, Jones had this to say.

He said: “What they’re asking for, what Jurgen Klopp’s looking for, doesn’t, to me, seem to be that much – he should just be getting it.

“I think we’ve seen him frustrated so many times in the past year, that this year, I think, is key for Jurgen Klopp.

“They need to back him, they need to show that they are willing to give him what it takes to win the Premier League again, to get back in that conversation of winning the Champions League as well.

“Otherwise, he might start to lose motivation and be like, ‘what am I striving for here? I’ve given you some of the best years of your history. If I’m going to get back there, I need to know that you’re behind me, giving me the resources that Man City are getting, that Chelsea are getting, that Man United are getting’.”

So far this summer, Liverpool have signed Konate for a fee of £36 million and let go of Harry Wilson and Taiwo Awoniyi on permanent deals after finishing third in the Premier League last season behind Manchester City and Manchester United.

TIF Thoughts on Dean Jones’ comments on Klopp and FSG…

Given how Liverpool have already splashed the cash this summer by bringing Konate to Anfield, this shows that FSG may not be fully against spending money to improve Klopp’s squad.

However, with the likes of Manchester City having signed Jack Grealish and potentially bringing in Harry Kane as well, Manchester United signing Jadon Sancho and Raphael Varane, while Chelsea close in on a deal for Romelu Lukaku, it’s understandable why Jones thinks there could be some concerns from Klopp at the extent to which FSG would be willing to spend money so the Reds can compete with these other teams moving forward.

Do you think there could be cause for concern about Klopp and FSG's relationship?

In our view, if Klopp is confident that the squad he currently has are able to compete for titles this season, then there should be no cause for concern surrounding his relationship with FSG or his future at the club.

However, if the Reds do end the upcoming season with no silverware and behind the previously mentioned teams in the league, then perhaps there should be a rethink at the top of the club regarding their transfer strategy.

In other news: ‘From what I’m hearing’ – James Pearce reveals Liverpool’s midfield plans amid Saul links