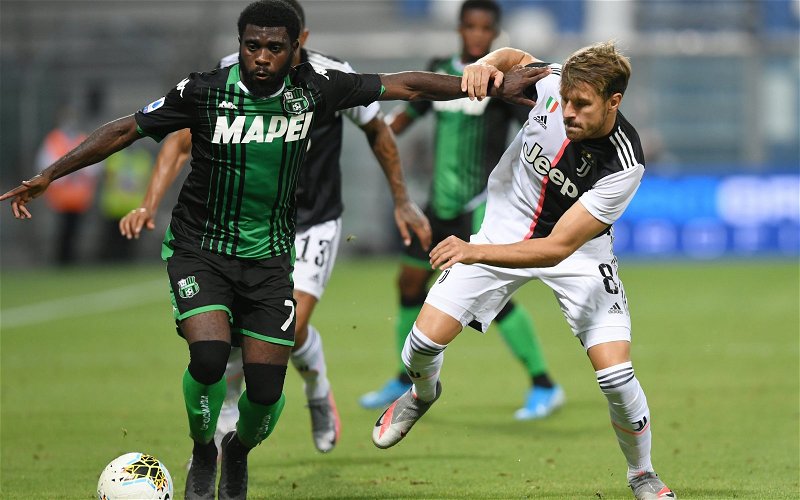 Conor McGilligan has been speaking in the latest video on the One Leeds Fan Channel on YouTube about links suggesting Leeds United may sign Jeremie Boga.

The Ivory Coast international is currently with Sassuolo after leaving Chelsea back in 2018 and experienced a relatively poor season in Serie A last time out, managing to net just four goals and registered only two assists.

Do you think Leeds should have signed another winger by now?

It has been reported by the Daily Mail that Leeds could move for the Ivorian, who is capable of playing on the left-hand side as well as through the middle, which would allow more flexibility for Marcelo Bielsa when picking his starting lineup.

McGilligan analysed whether or not Leeds would move for Boga and what he would be like as a signing.

“It looks like Boga has been a massive hit with Sassuolo since moving from Chelsea, I believe it was back in 2018. He can play anywhere along the frontline, he’s fast and he’d bring a real variety to Leeds’ attacking play.

“Apparently, now we’ve got a really good chance of signing him if we wanted to go there, and this is one of those opportunistic things, isn’t it? But, it’s £25 million, and as we were saying yesterday on The Rumour Mill, will Leeds scoop up that kind of fee?

“He’s definitely mouldable, he’s definitely got all the attributes that you’d see in someone like Adama Traore, so would Leeds go there and do that? That is an opportunity, if Leeds could get him for around £15 million and then instalments on top of that, maybe that’ll be a very, very good signing.”

TIF Thoughts on links to Boga…

There does not appear to be a glaringly obvious issue at Leeds on the wing at the minute, with standout performers from last season Raphinha and Jack Harrison capable of being starters for Leeds this season once again, and with Boga surely wanting to be a starter if he moves, it wouldn’t make sense to splash out that heavily on a backup winger.

Boga is still young so would arrive with a potentially high ceiling and the possibility to sell him on for a huge profit if he adapts and performs in the Premier League, but with Marcelo Bielsa claiming (via Phil Hay) that more permanent signings are unlikely, Boga may be staying put in Italy.