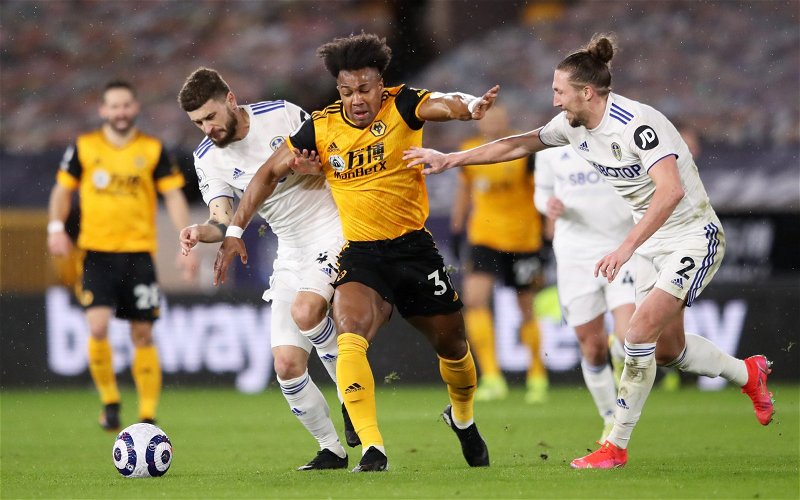 Leeds United podcaster Gary Devonport has been sharing his thoughts on the possibility of the Yorkshire club making a move to sign Wolves winger Adama Traore during the current summer transfer window.

This comes after Devonport made a guest appearance alongside Joe Wainman on his YouTube channel, where he spoke about the latest transfer-related topics concerning Marcelo Bielsa’s side.

Traore has been linked with a move to Elland Road this summer, and the pair discussed a recent claim from journalist Duncan Castles that the Whites had launched a £30m bid for his services.

Devonport had this to say about the winger and a potential move to Leeds.

He said: “I don’t rate him, to be honest, I don’t. From watching him at Wolves, I don’t really see what he brings. Yes, he’s a little bit of an anomaly because he’s a unit and he’s a sprinter.

“The thing for me with that link is the £30 million target. I mean, is Victor Orta, Bielsa and the club at the moment going to splash out £30 million on a second winger who is getting on a little bit?

“We don’t need him for the starting XI at the moment, it would take some shifting of Raphinha and [Jack] Harrison at the moment, for me, and I don’t know, I get the feeling with the Traore thing, he desperately wants to move and again our name is chucked in there just to add a bit of credence.

“I can’t honestly see that one happening, if I’m really honest.”

Wolves signed Traore in the 2018 summer transfer window from Championship side Middlesbrough.

Since then, the 25-year-old, who is currently valued at £27 million, has made 131 appearances for the Midlands club across all competitions, in which he has managed to score 10 goals and provide 18 assists along the way (per Transfermarkt).

Considering how the Spaniard only managed to score three goals and provide three assists in 41 appearances last season across all competitions, it’s easy to see why Devonport doesn’t think Leeds should spend the £30 million that they have reportedly put towards the winger to bring him to Elland Road this summer.

Do you think Leeds should spend £30m on Traore this summer?

In our view, if Traore would not be guaranteed to be a regular starter at Leeds ahead of the likes of Raphinha and Jack Harrison as Devonport mentioned, then perhaps the club should move away from a potential deal for the Spaniard and maybe focus on signing someone else for a lower fee who would not be put off by potentially being a sporadic starter for the club.