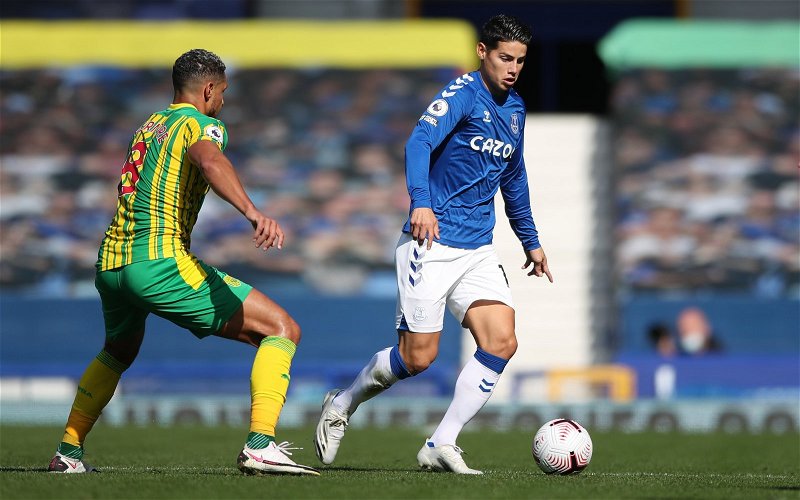 Everton are set for an interesting few weeks ahead, with the Toffees potentially facing interest from other clubs for some of their players between now and the end of the summer transfer window.

One of those that could seemingly be heading for the Goodison Park exit door in the near future is James Rodriguez, with the midfielder reportedly becoming unsettled at Everton after Carlo Ancelotti’s departure.

Everton are rumoured to be willing to sanction Rodriguez’s departure this summer, but only if their valuation of the midfielder is met by any potential suitors.

The 30-year-old made 26 appearances in the Premier League for Everton last term, and chipped in with six goals and nine assists for the Toffees, as they finished 10th in the table.

Speaking on his Twitch account (as per Sky Sports), Rodriguez revealed that he is keen to play regular football, whilst also admitting that he was missing life back in Italy, saying:

“I would like to play wherever they want me, I already played in all the leagues; I am missing Italy, it would be a good option.”

Speaking in on The All Together Now Everton Podcast, The Athletic’s Greg O’Keeffe admitted that he isn’t surprised to hear rumours that Benitez isn’t too keen on Rodriguez ahead of the new Premier League season.

O’Keeffe felt as though it would be a ‘terrible shame’ to not see the 30-year-old feature for Everton moving forwards, although he was understandable of the predicament facing the newly appointed Toffees boss.

He said: “What we’re going to come across with Rafa Benitez is that he doesn’t really have much room for passengers, even extremely lavishly gifted ones.

“He wants everybody to be prepared to basically justify their place with hard work and defensive organisation. I think James Rodriguez possibly doesn’t give you that. He doesn’t give you consistently enough, anyway. I don’t think he’s a Rafa-type player, and I’m not surprised that he’s lukewarm on him.

“I know the quotes that emerged over the weekend from James were a bit non-committal. So I can see a potential parting of the ways. But I’m conflicted as well, because I just think it would be a terrible shame not to be able to watch him in an Everton shirt more often.

But we’re not the Harlem Globetrotters, we are here to try and win things and be competitive, and I suppose the ultimate question is, does he help you do that? Last season, to an extent, yeah.

“He started 21 games – and he did have a decent return. So, you couldn’t say he had no impact. But I just think Benitez is going to want a player who’s going to be starting a lot more games.”

Everton are set to take on Southampton in their first match of the Premier League season, in what could potentially be a tricky test for Rafa Benitez’s side, against a Saints side that finished 15th in the top-flight standings last term.

It seems as though he’ll be heading for the exit door before the summer transfer window reaches a conclusion, which might not be the ideal situation for Everton.

Rodriguez has shown glimpses of his qualities with the Toffees last term, but some might argue that he lacks consistency when it comes to his level of performance.

But Benitez will be looking to have a group of players that are fully committed to the cause moving forwards, and if Rodriguez doesn’t pull his weight, then it seems as though the Columbian international could be set to depart Goodison Park.

We’re set for an interesting few weeks ahead at Everton, as you would imagine they’ll be keen to find a suitable replacement for Rodriguez if he was to leave the club.