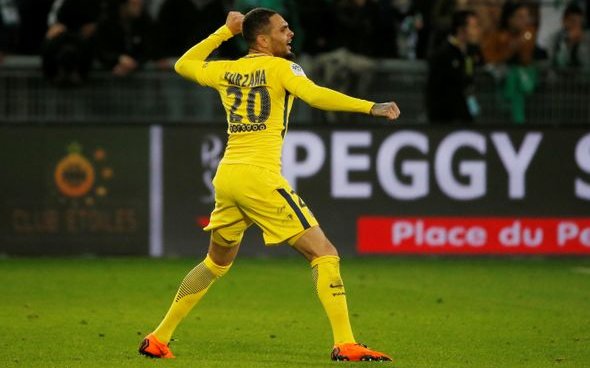 Crystal Palace are having their name attached to the French left-back, whose future at PSG is unclear especially after only starting 15 league games last season with Mitchel Bakker playing more regularly last season after being handed 26 league outings to Kurzawa’s 19.

The Eagles only have Tyrick Mitchell as a senior first-team left-back following the departure of Patrick van Aanholt who joined Galatasaray on a free transfer, so links suggesting that they may be interested in Kurzawa could make sense.

It’s been reported that PSG are demanding £11 million for the sale of the left-back.

Cook gave his thoughts on the links to Kurzawa.

“Tyrick Mitchell is not someone that you can necessarily rely on to stay injury-free all the way through the season, he doesn’t have a huge amount of experience, and it wouldn’t be a bad idea for us to have a little bit more depth on the left-hand side of the back four.

“Whether or not Kurzawa is the person that will be best-placed to fill that hole remains to be seen. He wouldn’t exactly fit the age profile, with we’ve been looking at in the transfer market over the last 18 months or so.

“I believe he’s 28 years old now, and the fee itself in relation to what PSG would be willing to accept from Crystal Palace for the transfer is something that’s intrigued me, because they paid, I believe, £22 million to Monaco back in 2015 when they signed him.

“I’m not suggesting that that fee is a direct indicator of what they would be willing to accept this time around, but it’s not going to be a deal that’s done for pennies.

“He will be on significant money over in Paris, I’m not sure of the exact numbers, but his age profile, his career to date, and what he would be expecting coming into a Premier League football club – it doesn’t necessarily tick that many boxes in my mind in terms of a transfer that we would necessarily be interested in.”

With Palace’s lack of depth at left-back, bringing in a French international such as Kurzawa would make sense, especially if Patrick Vieira’s presence in the dugout could represent an added pull for his compatriot.

However, it could be a signing that disrupts the growth and development of their academy product in Mitchell, as Kurzawa would unlikely want to come and be a backup at Selhurst Park, as that is his current role in Paris, where he is also more likely to win pieces of silverware and has the opportunity to play in the Champions League.

Therefore, merely persuading Kurzawa to join could be just as significant a hurdle as finding the finances to do the deal whilst maintaining the shape of the team they are trying to build at Palace.