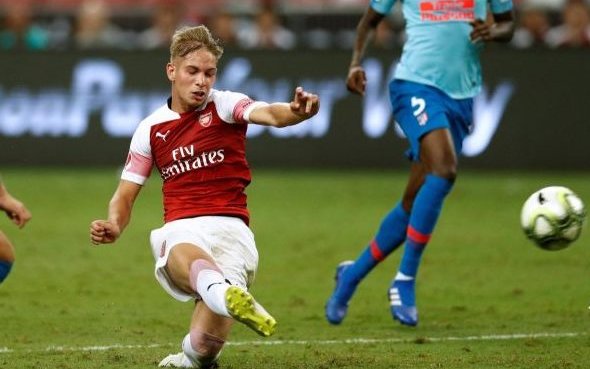 The Athletic’s Arsenal correspondent James McNicholas has outlined where he expects Emile Smith Rowe to play now the club have signed Martin Odegaard.

After enjoying a reasonably impressive loan spell with Arsenal last season, Odegaard has re-joined the club permanently for a reported fee in the region of £34m.

Alongside this incoming, the Gunners also renewed Smith Rowe’s contract, giving him the number 10 shirt.

However, despite the shirt number change, it sounds as though Odegaard is more likely to play the ‘number 10’ role for Mikel Arteta in the near future.

While talking on the Arsecast Extra podcast, McNicholas explained that Smith Rowe will probably move wide in order to accommodate Odegaard.

He said: “Yeah, I think that’s where his [Smith Rowe’s] immediate future lies.

“You know, I think Odegaard is going to come into that number 10 spot and Smith Rowe will be out there on the left with [Kieran] Tierney. And actually, that was a pretty promising combination for much of last season, so I think we’ll see more of that.”

Smith Rowe played behind the striker in Arsenal’s 2-0 home loss to Chelsea, while he also started there against Brentford when the Gunners suffered the same result.

With these two poor results in mind and the arrival of Odegaard, there is a chance Arteta will look to mix things up when his side travel to Manchester City next weekend.

When Odegaard played for the club last season, he featured alongside his English teammate on 13 different occasions, proving that the two players are compatible.

Perhaps getting the best out of those two will be key for Arteta if he is to turn around Arsenal’s difficult start to the season.