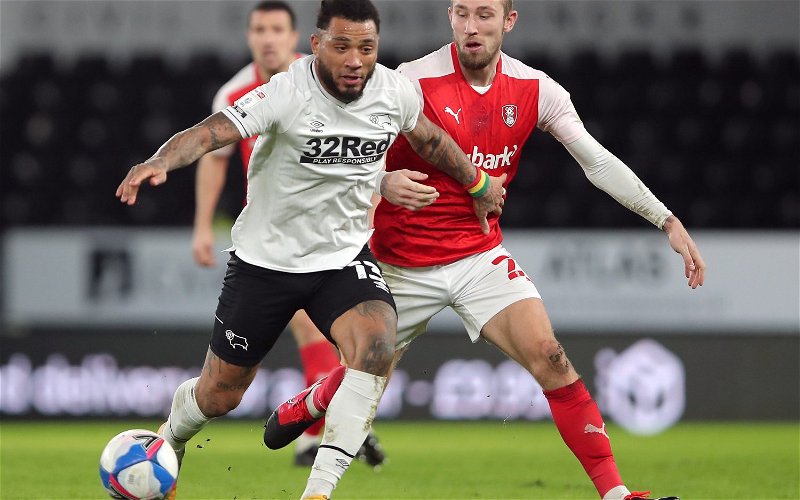 Derby County fans on Twitter have been responding to the latest news to emerge concerning the injury sustained to Rams striker Colin Kazim-Richards during the club’s recent Championship match against Peterborough United.

This comes after Derby journalist Ryan Conway shared a post on his official Twitter page revealing that Kazim-Richards is now “expected to be out for up to three months following a torn Achilles”.

Conway then added that this is a “blow” for the Rams “but better than initial fears that it could have been season-ending”.

This post then quickly gathered a lot of replies from Rams supporters who were not shy in airing their thoughts and feelings on this latest update.

So, what did these Derby fans have to say in response to this update from Conway on Kazim-Richards’ injury?

“Wowwwwwww the curse rolls on. All the best with the recovery Colin”

“Still bad but I feared he wouldn’t play again this season so have to take the positives.”

“Said at the beginning of the season what we were gonna need more than anything was luck. And as usual it’s the bad variety that shows up.”

Looking at the replies to this post, it seems as though the majority of these Derby fans are rather disappointed to hear that Kazim-Richards will be out of action for the next three months as Conway claimed.

Are you worried for Derby having Kazim-Richards not in the team?

Given how the 34-year-old was Derby’s top scorer in the Championship last season with eight goals to his name, it’s easy to see why these fans are disappointed he won’t be playing for them for the next few months and why Conway described it as a blow.

Moving forward, everyone at the Midlands club, especially manager Wayne Rooney, will be hoping that the other attacking players that Derby currently have in their squad, such as Jack Stretton and Sam Baldock, can do their best to fill in for Kazim-Richards while he is on the sidelines for the next few months.

In other news: ‘I don’t think this is good news for Derby fans’ – Finance expert drops worrying claim