Celtic fans have been reacting to claims surrounding the future of forward Odsonne Edouard.

Now, according to a report by Duncan Castles, another Premier League side has shown an interest in him in the form of Brighton and Hove Albion, with his report claiming that Celtic have been offered a ‘guaranteed transfer fee of £18.5million’ that ‘could break through the £20m mark’.

The 23-year-old has certainly been a useful asset to Celtic over the years, his record of 83 goals in 169 games, just shy of one in every two, has helped deliver the Bhoys a number of trophies.

The news of Brighton’s bid was relayed to fans by @aboutceltic on Twitter, where fans seemed more than happy to cash in on him and let him leave:

“Take it and run”

@skimmerbhoy
“Thanks for the memories but good riddance.”
@InmyeyesM
“That’s a really good deal for him being in his last year of contract.”
@BhoyShuggz
“We should 100% accept that it’s a good deal imo. Way better than letting him go for free when his contract ends”
@Marc200388
“Really is time to sell, he wants away and in last year of contract. Have to go get a good replacement though.”
@MickeyM51050192
“That’s a helluva offer man, we’ve gotta take that all day”
@mjoneill67
“It’s happening!”
@LouisSelling 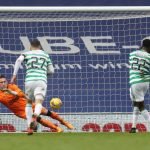 Considering his contract runs out next summer, it would be a rather smart move for them to make, otherwise they risk losing him for nothing in 2022.