A lot of Celtic fans have taken to Twitter to voice their opinions over the latest revelation on Carl Starfelt, with the club reportedly pulling out of talks.

The news was relayed by Everything Celtic on Twitter after noted journalist Fabrizio Romano confirmed on his Facebook page that Celtic had bid €5m (£4.27m) but talks have slowed down lately. 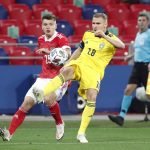 Celtic are reportedly still waiting to find out what the future holds for defender Kristoffer Ajer with the Scottish club preparing themselves for a ‘big-money’ offer for the Norwegian.

Many Celtic fans flocked to Everything Celtic’s tweet to voice their frustrations over the possibility of not signing Starfelt:

“Ridiculous! We should get in our new targets early to settle in but it seems unlikely (hopefully l am wrong!).”

“Why not sign Starfelt anyway and actually have some depth for once? We are a shambles man”

“We’ve now to believe we need to sell before we can buy! Ok I’ll play along… Why are we rejecting £12m+ AJER WANTS TO LEAVE!!! Deary me! MADNESS!”

“That’s a joke man just get it done”

“This is a disgrace, Ajer clearly wants out, we need defenders even if he stays”

“@CelticFC stop messing about and get on with it.. we need this guy whatever happens with #Ajer.”

“Surely this shows how pathetic our board are”

It’s no surprise that Celtic are desperate for Ajer to remain at the club as he was a consistent and near ever-present performer in their side last campaign with a 7.16 WhoScored rating in the league.

Ange Postecoglou made it two wins in his first two friendly games as Celtic manager with his side beating Charlton Athletic 2-1 in a pre-season encounter on Saturday.

In other news: ‘He looks much fitter’, ‘Lost a bit of timber’ – Many Celtic fans buzz as footage emerges