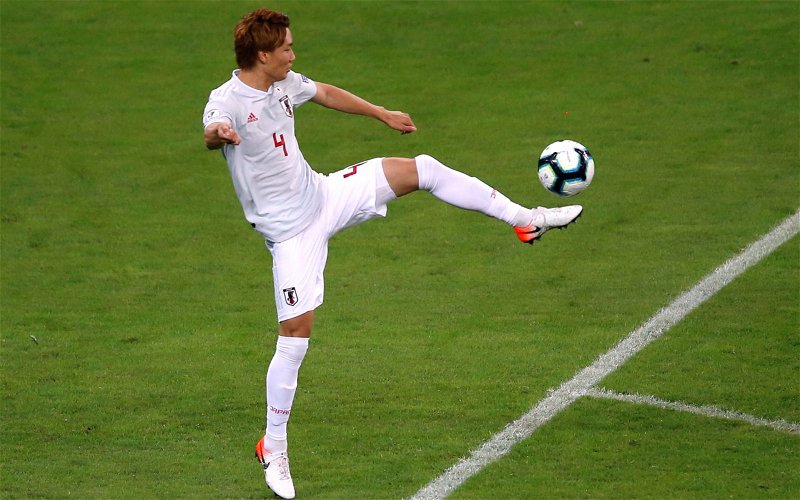 A report in The Express claims that Celtic are showing an interest in the Japanese central defender, noting that new Celtic boss Ange Postecoglou, who may know him from his own time in the Japanese league with Yokohama F. Marinos, ‘would love to bring Itakura on board’ at Celtic.

However, the report also claims that the English champions have asked for a ‘substantial’ loan fee to be paid for his services, which could force Postecoglou’s side to start looking elsewhere when it comes to centre-backs as they look to replace Kristoffer Ajer following his move to Brentford earlier in the window.

Although, it should be noted that Itakura’s contract runs out next summer, so any loan fee could essentially be a prelude to a permanent deal next summer on a free transfer if things work out.

This latest claim was relayed to fans by @aboutceltic on social media for them to react to, where there were plenty urging the club to sign him this summer, with some feeling very confident about the way they could manage the deal:

“Get him in right now”

@marcusgrahamm
“Pay the substantial loan fee then bring him in on a free, simple”
@C_67_
“No-brainer if you’re Celtic. Plenty of experience in the Eredivisie, a Japanese international and would help Kyogo to settle. Get him signed.”
@AJThoms214
“Brilliant option for Celtic then, get him on loan and then take him on permanent.”
@cfclyle
“Nice loan him then sign on a free smart thinking”
@Smithybhoy798
“SIGN. HIM. UP! Try & get a permanent deal in place”
@67_Celtic_1888
“2m loan and sign on Bosman. Result.”
@atown_colm
“Thank you Mark Lawwell, very cool!”
@spnkphne

Is Postecoglou being backed by Celtic?

It certainly isn’t a straightforward deal, so it will be interesting to see what route, if any, the club end up going down to make it happen.