Lots of Celtic fans have been talking about a news update regarding Vakoun Bayo that emerged on Twitter.

Damien Comolli, who is currently in charge of recruitment at Toulouse, has recently commented about the club’s potential permanent signing of Bayo from Celtic. He made it clear that while the striker is someone that he and the club’s manager would want to keep at Toulouse, they haven’t exercised the option to buy him permanently because it was too expensive.

Does Bayo deserve another chance? 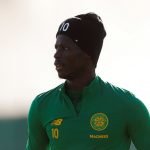 He stated that the French side are ready to take him, but it isn’t known as to which form of deal will make that possible in the future.

This update regarding Bayo was posted on Twitter by Everything Celtic. Many Hoops fans began talking about it.

“If not selling, play him, concentrate on positions we desperately need players for!!“

“Given his form at end of season for Toulouse and Griff looking to have departed, the big man could be useful to have for qualifiers. Gives a different option to both Eddie and Ajeti.“

“Give the boy a chance.”

“Return of the King.”
Credit: @ToekneeClarke
“The crow flies once more”
Credit: @NotoriousBAG
“Bring him home.”

In his loan spell at Toulouse, Bayo scored 10 times in Ligue 2, finding the back of the net 13 times in all competitions. He also racked up four assists.

It might be a sign that he’s a competent goalscorer and considering that Odsonne Edouard has been linked with an exit, the Hoops will need striker options. Bayo is still only 24 and considering his record from the 2020/21 campaign, he might be able to do a job at Parkhead.

In other news: ‘Big loss’, ‘Will be missed’ – Lots of Celtic fans react as ‘sad’ news emerges