Exclusive: Bull admits he would take Spurs outcast at Wolves

Since Wolves earned promotion back into the Premier League, they have opted for a double pivot of Joao Moutinho and Ruben Neves. While this brings about a huge amount of technical ability they are not the sort of midfielders that are also willing to put their foot into a 50/50 challenge, which is why Wolves legend Steve Bull would love to have Tottenham’s Harry Winks at the club.

Winks has found first-team starts difficult to come by recently and has thus, well and truly fell out of favour within the England set-up under Gareth Southgate and a move away from Spurs has been touted.

Is Winks good enough for Wolves? 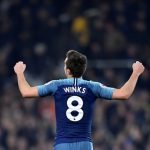 The 25-year-old is both technically great on the ball having the sixth-best pass completion rate within the Spurs squad with 554 of his 658 passes coming off but also does the dirty side of the game, winning 14 of his 24 tackles last campaign alongside having the third-best success rate when pressing the ball of players to have started a Premier League game for Tottenham hotspur.

There was talk of Winks being sold in January with Valencia interested in the midfielder but nothing materialised and since the transfer window closed, Winks was handed just three league starts, but Bull would still take him at Molineux, and he spoke exclusively to This is Futbol about Winks:

“I’d take him all day long because he’s an England international, I know he’s not at the Euros but he’s still a talented player.”

Winks was handed his debut under Mauricio Pochettino who once called him “amazing” following Spurs’s dramatic 2-1 victory against Fulham during the 2018/19 season.