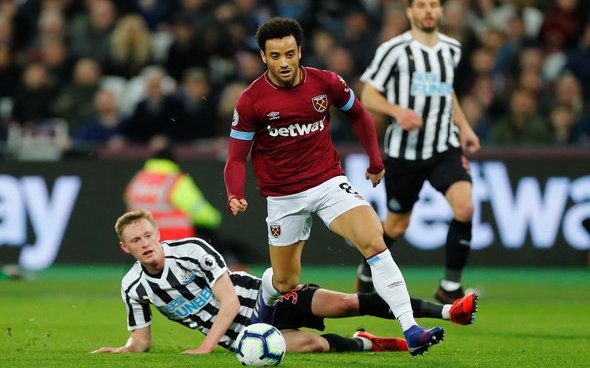 West Ham United pundit Dave Walker has been sharing his thoughts on former Hammers winger Felipe Anderson and his recent departure from the east London club.

This comes after Walker co-hosted a recent episode of The West Ham Way Podcast, where he spoke about a range of topics concerning David Moyes’ side.

On the subject of Anderson and his recent move to Lazio, Walker had this to say.

He said: “I think it is tinged with a bit of sadness, really, because I just can’t help but think, like I’ve said so many times before, that Felipe Anderson, the issue for me is psychological, because he’s got all the attributes in the world to be a top, top player and he showed it at West Ham, didn’t he?

“And there was part of me that was almost hoping there might be light at the end of the tunnel for another crack at first-team football, and I, maybe, more saw him as a number 10 maybe, where he didn’t have so much defensive responsibilities, where he wasn’t expected to cover the left-back, for example.

“Maybe he’s just a luxury player that you can give a free licence to. Listen, I’m not saying a sports psychologist would have categorically have been the answer, but I would have been a bit disappointed to learn that we wouldn’t even have looked at that as an option, to try and work on him psychologically, because in terms of ability, he has the ability, but he just needs to have the right mindset.”

Anderson joined West Ham during the 2018 summer transfer window from Lazio in a deal worth a reported fee of £34.2 million (per Transfermarkt).

During his time as a West Ham player, the 28-year-old, who is currently valued at £9 million, has made 73 appearances for the club across all competitions in which he managed to rack up a total of 12 goals and 13 assists in the process.

Whether there were any issues with Anderson’s mindset during his time at West Ham that Walker hinted at which led to his departure from the club is probably something only he would truly know for sure himself.

Do you think West Ham should have given Anderson another chance in the team?

However, considering how the Brazilian only managed to provide one assist during the 10 games he played for FC Porto during his loan spell there last season, perhaps this may have persuaded the Hammers to let go of the winger this summer if they had no intention of using him regularly in their team moving forward, in our view.

Looking ahead to the future, hopefully, Anderson will be able to find some better form back at Lazio than he had at Porto and West Ham.