According to the transfer insider, Jesse Lingard is still open to a potential return to West Ham this summer following his loan spell in the second half of the 2020/21 campaign. 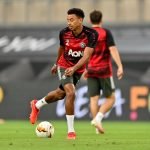 However, Romano also admitted West Ham are waiting to see if United are willing to drop their asking price with the Red Devils linked with the potential signing of Raphael Varane.

The Daily Mirror has reported a potential return to the London Stadium would cost the Hammers in the region of £30m this summer as a result of his impressive form last season.

Discussing the future of the Manchester United midfielder, Romano had the following to say on the matter.

“At the moment they still don’t have an agreement with Manchester United.

“So they hope that maybe, during the market, if Manchester United will need money to sign Varane, sign a midfielder, maybe [a] right-back – so they want to do something else in the market, they are prepared to sell Lingard at different conditions maybe in the next weeks – that’s why West Ham are waiting.

“But they’re still keeping in contact with the agent of Lingard, and they know that the player would be open to re-joining West Ham after his fantastic loan spell at the club.”

Last season, Lingard did not feature once under Ole Gunnar Solskjaer in the Premier League, which forced him into switching to the Hammers for a half-season loan spell.

The Red Devils have also just announced the signing of Jadon Sancho from Borussia Dortmund, whose versatility may push Lingard further down the pecking order, which makes us question whether the 28-year-old will actually get much game time at Old Trafford if he is to stay.

Lingard thrived at West Ham last season and we think he should be seriously considering forcing a move back to the London Stadium if he feels it is a gamble in potentially not playing regularly for the Red Devils.

In other news: ‘Albion had no choice’ – Journalist blasts ‘joke’ West Ham bid