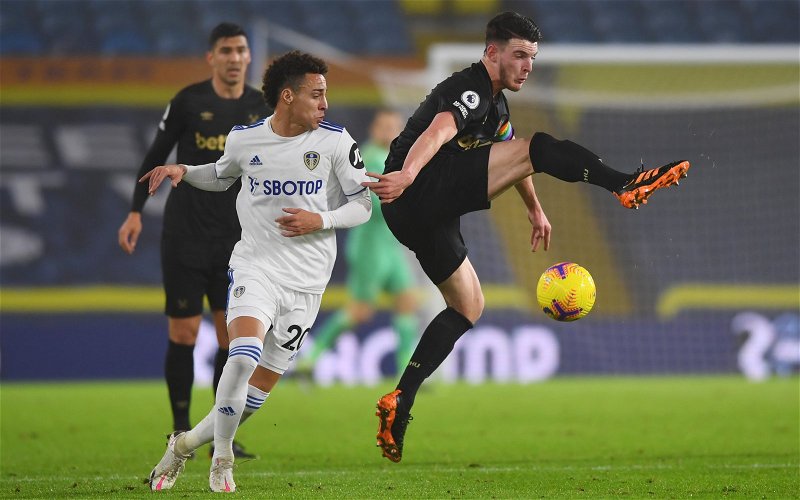 West Ham United insider @ExWHUemployee has been discussing the current state of affairs concerning Hammers midfielder Declan Rice and his situation at the east London club.

This comes after Ex co-hosted a recent episode of The West Ham Way Podcast, where he discussed a range of topics concerning David Moyes’ side.

On the subject of Rice, whose future at the London Stadium has been the subject of speculation recently after he reportedly turned down a contract offer from the club, Ex had this to say on the situation at this moment in time.

He said: “The bottom line is, I don’t think he wants to move as such, I never said that.

“He was told we want to kick on from this season, there’s no evidence of that at the moment.”

Rice, who worked his way through West Ham’s youth sides after joining from Chelsea’s youth academy back in 2013, made his senior debut for the club in May 2017 under former West Ham boss Slaven Bilic.

Since then, the 22-year-old, who is currently valued at £63 million, has made 145 appearances for West Ham across all competitions, in which he has scored five goals and provided five assists along the way (per Transfermarkt).

Given how West Ham have only managed to sign Craig Dawson thus far this summer, it’s understandable why Rice might be a bit unsure of his future with the club if they told him that they would be bringing new players in during the off-season.

Do you think West Ham are in danger of losing Declan Rice this summer?

However, with the club still having until the end of August when the current summer transfer window closes to bring in some new players, they will have to make sure they bring in the right players to not only strengthen their squad but also to keep their supposed promise to Rice and hope he will eventually sign a new deal with them.

In other news: Ex claims rumoured transfer move is in doubt as ‘dilemma’ emerges for Moyes at West Ham