Sevilla will sell West Ham target Youssef En-Nesyri this summer if the right offer comes in, La Liga expert Euan McTear has told This Is Futbol.

En-Nesyri had a strong season in front of goal last term, registering 24 times in all competitions for Julen Lopetegui’s side.

The 24-year-old has been heavily linked with West Ham since the start of the year, with the Daily Star having previously reported on the east London club’s interest. 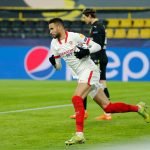 And McTear believes Sevilla are willing to do business this summer, though he has warned West Ham may have some convincing to do when it comes to trying to lure the player to the London Stadium.

“I think if the right offer comes, Sevilla would be happy to move him on and bring in somebody else,” McTear said.

“For West Ham, I think it’s more about convincing the player and his agent than convincing Sevilla at this point.”

If En-Nesyri does fancy a new challenge in the form of a move to the Premier League, then West Ham are a side definitely worth considering.

They are set to play in Europe this year and based on their sixth-placed finish last season, with David Moyes in charge, they look capable of challenging for Champions League football.