Speaking on the latest edition of the Last Word On Spurs podcast, Jamie Brown has been speaking about Tottenham Hotspur’s squad ahead of the upcoming 2021/22 campaign.

One player which was discussed in detail was the right wing-back who Spurs signed from Wolverhampton Wanderers last summer, Matt Doherty.

Will Doherty find form under Nuno? 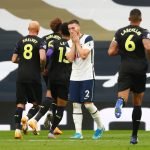 The Irishman struggled to hit his best form last season for Spurs after making just 17 appearances for the Lilywhites in the Premier League, in which he provided three assists (via Transfermarkt).

However, Brown put Doherty’s shaky first season at the Tottenham Hotspur Stadium down to the now-former Spurs manager, Jose Mourinho.

“It’ll be interesting to see, if we do use a back four, what kind of licence Matt Doherty has to get forward, because I think defensively, he leaves a lot to be desired, but attacking-wise, we know what he’s capable of.

“And he’s clearly a player that loves to do that and was really held back by Jose Mourinho.”

Signing Doherty from Wolves appeared to be a great bit of business for Tottenham last summer after the 29-year-old scored four times and provided five assists in the league for Nuno Espirito Santo in the 2019/20 season (via Transfermarkt).

There is no doubting Doherty was unable to live up to the standards he set at Wolves, however, he was given a much more defensive role under Mourinho than he was used to at Molineux.

With Espirito Santo now at Spurs, could this bring about a revival for Doherty’s Spurs career which will see him blossom under the Portuguese manager?