A whole host of Tottenham Hotspur fans have reacted positively on Twitter to the latest Pierluigi Gollini news.

The Italian ‘keeper is set to be Spurs’ first signing of the Nuno Espirito Santo era, albeit a loan deal. 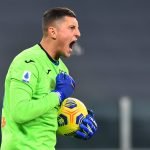 According to Fabrizio Romano, Spurs have the option to extend the loan deal until 2023 as well as holding an option to buy the goalkeeper for €15m (£13m).

A lot of Spurs fans have shown their delight on Twitter in response to the latest transfer news.

“No way we acc signed someone”

“Looks a good signing for the future! #COYS“

“Oh my gawd we making a transfer”

“This is such smart business btw”

Gollini would be arriving with some experience of playing in England having been on the books of Manchester United during the early part of his career as well as playing for Aston Villa in the Championship.

With the keeper signing on loan and the option to buy, it could signal that Spurs want to take a closer look at him before committing to a Hugo Lloris replacement.