The Lilywhites wished Gareth Bale a happy birthday on Twitter and in a follow-up tweet, they showed two photos of him from his first and last games in a Spurs shirt. 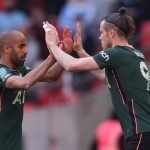 Bale returned to N17 for the 2020/21 campaign, which saw the Welshman net 11 goals in 20 Premier League appearances (via Transfermarkt).

The 32-year-old’s loan spell with Spurs has since come to an end and he has returned to his parent club Real Madrid, where he has one year remaining on his current contract.

Spurs fans flocked to the tweet from the official club account to speculate as to whether the tweet was a sign that Bale could return for the upcoming season, which has previously been rumoured.

“One more year please. Get it done.”

@ztj521
“One more year pleaseeeee”
@raffaad23
“What’s this teasing all about Admin”
@Lilywhite_Rose
“So is he staying?”
@thfctoby_
“Why are you doing all this”
@Samwyt
“Don’t tease us admin”
@CashmoreMatty

It is reported Spurs would be interested in bringing Bale back to the Tottenham Hotspur Stadium, however, it is believed Bale is looking to see out the final year of his contract in the Spanish capital.

The reaction of these Spurs fans makes it apparent they would welcome the return of Bale for next season after he averaged a goal every 84 minutes in the 2020/21 campaign.

In other news: ‘Wow, this is great’, ‘Sorry I doubted you, Paratici’ – Many Spurs fans thrilled with rumour