A lot of Tottenham Hotspur fans have taken to Twitter to voice their thoughts on the latest transfer claim to emerge regarding their club.

According to Alasdair Gold, Sevilla centre-back Jules Kounde would be keen on a move to Tottenham as long as Real Madrid were not in contention to sign him.

Could Spurs afford both Kounde and Romero? 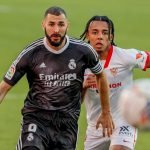 Spurs have been linked with a potential summer move for the French centre-back, however, it was also claimed he would prefer a move to La Liga giants Real Madrid.

It is believed Sevilla would be keen on a potential deal as they hold an interest in the Spurs defender Davinson Sanchez, who may be used in a possible deal between the two clubs.

Spurs fans flocked to the tweet from The Spurs Express to share their delight at the claim coming from the Tottenham correspondent.

@ndombgoat
“Don Paratici only does W’s”
@coysDb
“Just what we wanted to hear A Kounde x Romero partnership would be insane.”
@stavrin
“We might be cooking”
@thfccian9
“I must be dreaming bruh”
@PELoenberg
“Kounde x Romero we’re building a dynasty here”
@LAFElNTE
“Omg we are serious”
@_Deji27

Kounde played a huge role in Sevilla’s 2020/21 campaign, which saw the Frenchman feature 34 times in La Liga in which he found the back of the net on two occasions (via Transfermarkt).

It seems these Spurs fans were left delighted at hearing the 22-year-old centre-back could still be open to a possible move to north London this summer, but it seems Real Madrid may play a big part in his decision-making.