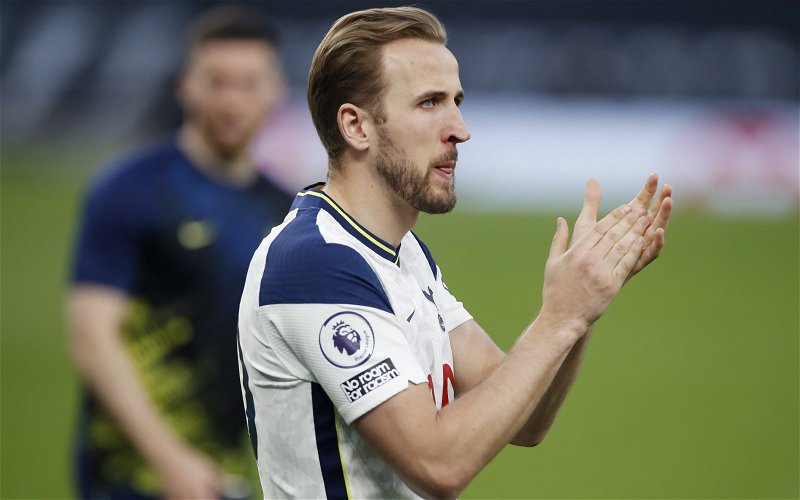 Transfer insider Dean Jones has provided an update on the future of Harry Kane amid reports that he could be set to leave Tottenham Hotspur for Manchester City.

Speaking back in March, the England captain claimed that he wasn’t going to be putting too much focus on his future in north London until after this summer’s European Championship. Now that they have come and gone, however, he finds himself in the middle of a tug of war over his services, with Manchester City reportedly having made a £100m bid for him.

Speaking about the matter on Touchline Talk, Jones felt that this was a transfer story that could end up going all the way down to the wire this summer, as he expected Kane to bide his time further before kicking things up a gear, having already reportedly told Tottenham that he wants out:

“He basically needs Man City to come and show their intent and put that money on the table, put the offer there so that he can then have the confidence to say to [Daniel] Levy, ‘it’s time to let me go, that’s a good offer for me’.

“Until that offer lands, there’s not a lot he can actually do. So it’s going to be quite strange for him if he does come into training again. And look, he’s not going to return to training until the final week of pre-season probably – unless he decides to link up early – that’s when he’s due back. So he’s going to be coming back in that week, building up to a match against Man City…

“There needs to be a bid waiting for him. Otherwise, it’s going to be all very awkward to say ‘yeah, I’m just waiting for that and then I’m probably going to kick off a little bit’. I don’t think he’s going to hand in a transfer request – not yet, anyway.

“I really do think that we’ll still be speaking about that on deadline day, personally.”

Can you see the Kane saga turning ugly?

Whilst Tottenham have always reportedly ruled out the idea of selling Kane, if Jones is right that Kane could get belligerent and ask for a transfer, it should be up to them to try and seek clarity on the matter as soon as possible.

That way, should things go bad for them and Kane does eventually find a way to leave the club, they can at least have as much time as possible to try and get a replacement forward lined up to take his place, rather than having to leave it until the last minute and possibly even ending up with nothing.

Whilst Tottenham may be sure with what they’re doing, they are going to need clarity on all sides and should be looking to force the issue rather than waiting for it to happen.