Journalist Alasdair Gold has recently talked about the possibility of Jorge Mendes’ influence increasing at Tottenham.

While Spurs have now appointed Nuno Espirito Santo as their manager, his agent happens to be Mendes, while one-time target Gennaro Gattuso also has Mendes as his agent.

Gold was talking about Mendes’ influence when he appeared in the latest video on his YouTube channel. He discussed the issue surrounding the Portuguese agent, providing details of whether he will now have increased power at Tottenham.

Do you think Mendes has a strong influence at Tottenham? 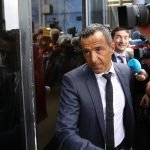 Mendes was heavily involved at Espirito Santo’s former club Wolves, and a lot of Wolves players are also Mendes clients.

Gold talked about the agent, stating: “What I would say is, anyone that’s fearing a repeat of Wolves and what happened there, it’s not going to happen at Tottenham. What I think will happen more with the Mendes relationship is that he will open some doors for Tottenham.

“Wolves had 16 Mendes players parked there, essentially, some of them are not there now – but 16 players came through the doors. But that was because the owners of Wolves – Fosun International – they kind of had this relationship with Mendes beforehand, and when he took over, it was a relationship between them all which [was] kind of a self-serving thing. It’s not going to be the same at Spurs.”

Given the mass of Mendes players that have joined Wolves since Espirito Santo’s arrival in England four years ago, you would be forgiven for thinking something similar could be about to happen at Spurs – but it seems for a variety of reasons, Gold thinks that will not be the case.

Matt Doherty is the only major Mendes client at Tottenham right now, although the club did have Carlos Vinicius in the side last season.

It shows that Mendes’ influence at Spurs has increased in recent times, but it has clearly not been as much of an influence as he had at Wolves. But since the Portuguese is an influential agent and his agency houses the likes of Ruben Dias, Cristiano Ronaldo and Fabinho, they’d have to deal with him at some point.

Whether Espirito Santo’s arrival affects things remains to be seen, but it appears as if there is no reason to expect an influx of players tied to the Gestifute agency turning up at Tottenham at this stage.

In other news: ‘Told by people close to the situation’ – Alasdair Gold reveals eye-opening Levy claim at Spurs