One player which Gold discussed was the Brazilian winger, Lucas Moura. 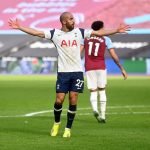 According to the Spurs journalist, Tottenham has received lucrative offers for Moura in the past and if another big offer is to come in this summer the club may look to offload him.

Moura joined the north London club back in 2018 from Paris Saint-Germain for a reported fee of £23m, and discussing the future of the £22.5m-rated winger, Gold had the following to say on the matter (48:07):

“Lucas is an interesting one. I was told it was unlikely that he’d be gone, although I also understand that he’s one that Spurs could get a fair bit more money for than other players.

“I know they certainly turned down a big bid for him only a couple of years ago.”

Moura still has three years left on his deal with Tottenham so we think it would take a pretty big offer for the 28-year-old to see Spurs offload the winger.

Spurs now have a new manager in Nuno Espirito Santo who has used Adama Traore’s pace to his advantage during his time at Wolverhampton Wanderers, which makes us question whether Moura will be used in a similar role this season.

Moura featured 30 times for Spurs in the Premier League over the course of the 2020/21 season and we are interested to see where his future lies with Nuno at the helm.