According to the Spurs journalist, Tottenham are closing in on the signing of Atalanta goalkeeper Pierluigi Gollini. 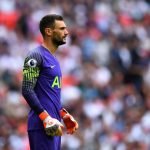 It is reported Spurs will secure the services of the Italian shot-stopper on an initial loan deal, with the option to extend the loan into the 2022/23 season and then the option to purchase the player permanently.

Gollini made the switch to the Serie A side from Aston Villa in 2018 in a deal believed to be worth in the region of £3.96m and has even spent time with Manchester United’s youth development side previously (via Transfermarkt).

Discussing the potential signings of the 26-year-old goalkeeper and defender Cristian Romero, Gold had the following to say on the matter.

“From what I’m told, there could be a little bit of a double deal. Not in terms of both coming in at the same time perhaps, but in terms of also talks taking place for Atalanta’s goalkeeper, who is Pierluigi Gollini.

“If you’re not aware of him, he’s a 26-year-old goalkeeper. He was, on the whole, Atalanta’s first-choice in their very good season last year, third in Serie A, in the Champions League I think the last 16, he got a cap for Italy under Roberto Mancini – I don’t think he made the final squad for the Euros.

“But he’s seen as a very good ‘keeper. He’s only 26 and I’m told Spurs have had advanced talks over his transfer as well.”

Going off the tweet from Fabrizio Romano on the potential deal, this seems an extremely well-structured transfer from a Tottenham perspective.

With Hugo Lloris now into the last year of his current contract, it gives Gollini a season to settle into the English lifestyle and then potentially the chance to take Lloris’ place as the first-choice goalkeeper if he is to leave next summer.

However, it will be interesting to see whether this potential arrival could bring forward a possible departure for Lloris given Gollini is a goalkeeper who is used to playing first-team football with Atalanta (via Transfermarkt).