Newcastle United fans on Twitter have been responding to the latest claim to emerge concerning Toon manager Steve Bruce.

The article claims that Newcastle owner Mike Ashley is “set to hand” Bruce a new three-year deal after he managed to the club in the Premier League last season.

This post then gathered a number of replies from Toon supporters who were not shy in sharing their thoughts on this latest news.

So, what did these Newcastle fans have to say in response to this claim about a potential new deal for Bruce?

“Please tell me this is a windup…”

“This club is a joke. I love Newcastle Utd but I hate everything it’s become under Mike Ashley. Joyless, soulless, striving for mediocrity at best.”

Looking at the replies to this post, it’s safe to say that these Newcastle fans are not too pleased to hear the news that Bruce could be signing a new deal at St. James’ Park.

Given how Bruce has failed to get Newcastle into the top half of the table since he took over at the club and only managed to gain one more point last season than he did in the 2019/20 campaign, it’s easy to see why these Toon fans don’t think Bruce is the right person to take the club forward for the next few years.

Do you think Bruce deserves a new contract? 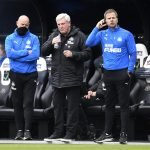 In our view, given how Bruce still has another year left on his contract at the Tyneside club, we feel that if he doesn’t improve on what he’s done with the team in terms of the number of points they manage to pick up in the season, then the club should look at bringing in someone new instead of offering him a new deal, or they run the risk of stagnating and angering the fans even further.