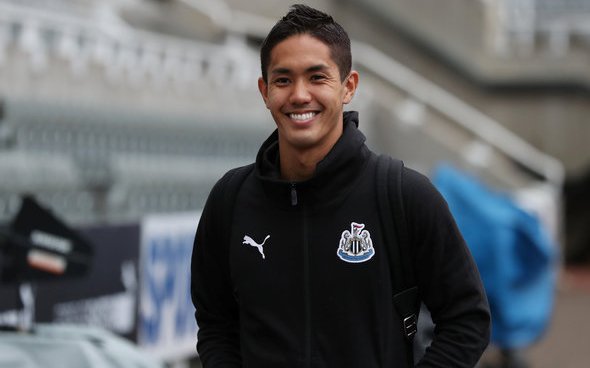 Newcastle United fans have been reacting to claims surrounding the future of Yoshinori Muto.

The 29-year-old Japanese international has had what can only be described as a disappointing time at St. James’ Park, only scoring two goals in 28 appearances since his arrival at the club in the summer of 2018.

However, it looks as if his time at the club could be about to come to an end, with a report from Greek outlet Sportime claiming that Greek side Aris Thessaloniki are ‘in negotiations’ over his signature. Newcastle are very much approaching the last chance saloon to make some money back on the deal given that his contract runs out next summer.

The news of the claim was relayed to supporters on social media by @NUFC360, where there didn’t seem to be too many concerns about him leaving, with many fans not seeing it as a major loss:

@darrenglasper
“Good it just wasn’t happening for him now where’s the replacement”
@andyrya42120787
“Fabulous news”
@CraigNE40
“I’m over it already”
@cyptoon
“Can only be good news, shame it never worked out but a kick up the arse to sign a striker”
@nufcrichys
“Let’s be honest.. that’s a positive.”
@PigeonKamikaze
“Some good news then”
@StephenWhyte

Given his lack of contribution to the club, this is hardly a surprising reaction, so perhaps it is better for the club to cut their losses and move on from the whole affair.