Speaking on the latest episode of The Done Deal Show, transfer insider Dean Jones has claimed that Manchester United are interested in Ruben Neves.

The Athletic reported earlier this year that Wolves would be willing to sell Neves this summer to raise funds for new manager Bruno Lage, but the midfielder still remains at Molineux as pre-season begins. 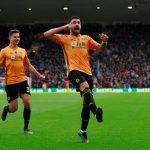 Neves has been with Wolves since 2017, but last season may well be seen as his most frustrating as he was handed 31 starts in the league, the lowest since he joined the club.

The links, which Jones had previously spoken about on The Football Terrace’s transfers segment (22:47), were once again discussed by the transfer expert.

“I’m told that the Neves pursuit is genuine, and while Arsenal were definitely the most active in that transfer and trying to get it over the line, United are still in the conversation.

“Bruno Fernandes particularly is obviously very keen for Neves to come and join, and I think the club are aware of that, so that’s another interesting thing to consider in this.”

If Neves was to join Man United, then Ole Gunnar Solsjkaer would be bringing in a player that his star man, Bruno Fernandes, is familiar with and will likely know how to work well with given their paths will have crossed with the national team.

At the reported £35 million, that price may be baulked at by Man United if they manage to close deals for both Jadon Sancho and Raphael Varane as their spending will be over the £100 million mark on just two players, so they may want to bring that price down before entering serious discussions.

Though with the likes of Nemanja Matic not getting any younger, further backup in the Serbian’s position may be required in the near future, if not this summer.