Expert reveals why Man United will not seek Dembele deal

Manchester United will not make a move for Barcelona winger Ousmane Dembele this summer, according to La Liga expert Euan McTear.

Barcelona are in financial trouble after exceeding the La Liga wage limit. As a result, they have been unable to offer Lionel Messi a new contract – meaning he is now a free agent – and the club cannot register their summer signings.

Boss Ronald Koeman needs to get some high-earners off the books in order to strengthen his squad and Dembele is one player who could leave the Nou Camp. 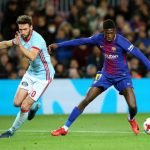 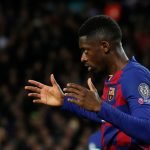 United have been linked with the 24-year-old in the past but the £135m winger is currently sidelined after suffering a knee injury while representing France at Euro 2020 last month.

Also, the arrival of Jadon Sancho from German giants Borussia Dortmund means boss Ole Gunnar Solskjaer may prioritise other positions before the transfer window shuts at the end of August.

McTear does not expect a switch to Old Trafford to materialise.

He exclusively told TIF: “Manchester United probably made the most sense but I think Sancho [joining] rules that out.”