Journalist Duncan Castles has recently revealed the latest on Aymeric Laporte, as he gave updates regarding his future at Manchester City.

Castles appeared on the latest episode of The Transfer Window podcast and spoke about multiple potential transfers in European football. One player that he talked about was Aymeric Laporte and he provided updates about the future of the Man City man, claiming that Barcelona are interested in signing him.

Do you expect Laporte to leave? 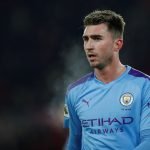 It has been reported that Man City are willing to include Laporte in any future negotiations for Tottenham striker Harry Kane, and other players that they could include are Raheem Sterling and Gabriel Jesus.

Castles talked about Laporte’s situation, saying: “This is something that City are working on at present and part of it is driven by Aymeric Laporte, and Pep Guardiola finally realising that Aymeric Laporte wasn’t the centre-back he built him up to be, and that having a centre-back who’s very good at passing the ball with his left foot doesn’t necessarily win you the Champions League if that centre-back makes errors in key games and gets caught out positionally.

“He is phenomenally well-paid – he was the best-paid centre-back in the Premier League until Virgil van Dijk moved to Liverpool. He’s on £7 million net a year. He is 27 and he’s obviously not happy with being a backup to John Stones and Ruben Dias.

“There is interest in Laporte in Spain, particularly from Barcelona. [The] problem – as with all these Barcelona deals – is yes, they want top players, but they don’t have much cash to play with and they’re trying to structure swap deals and offer players in exchange.”

Laporte played only 16 Premier League games last season, starting 14 of them, racking up a Whoscored rating of 6.76. He also started only three games in the Champions League, which suggests that Pep Guardiola perhaps doesn’t trust him anymore.

He’s still 27 and his contract at City runs out in the summer of 2025. It suggests that the club might still be able to earn a substantial fee from his sale. And if someone can afford the fee, City should consider letting Laporte leave, keeping in mind that Guardiola doesn’t seem to have him at the forefront of his plans.