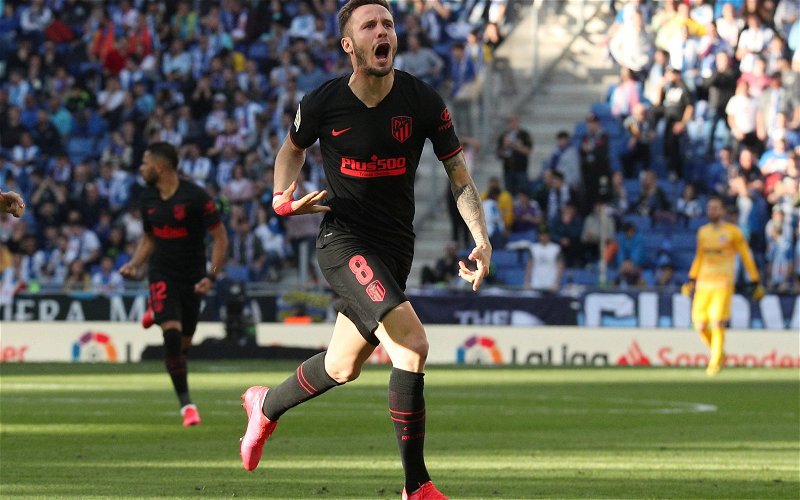 This comes after Jones made an appearance on a recent edition of The Redmen TV, where he spoke about a range of transfer-related topics surrounding Jurgen Klopp’s side at the moment.

On the subject of Saul, who has been linked with a move to Anfield this summer, Jones had this to say on the matter.

He said: “I don’t think that Liverpool have bid, pretty certain they haven’t bid.

“I think the more telling part is, I think he’s been offered around. I’m not saying Atletico Madrid are offering him around, because I think [Diego] Simeone’s quotes were pretty much that he wants him to stay, but he understands that he’s maybe getting a bit cheesed off at being moved around a little bit – playing full-back and playing in a wide right and playing in midfield and that kind of thing – but I think mainly it’s probably Saul and his people thinking about getting some options.

“Look, I don’t think it’s a goer personally. I’ve spoken to people, I’ve spoken to one person particularly who said there’s no chance of him signing, which is someone I believe, as well.”

Saul joined Atletico’s U17 side back in 2008 on a free transfer from Real Madrid’s U17 side. Since then, the midfielder has worked his way through Atletico’s youth teams before making his senior debut for the club back in March 2012 in a Europa League victory against Besiktas.

Overall, the 26-year-old, who is currently valued at £36 million, has made a total of 337 appearances for the Spanish club across all competitions, in which he has managed to score 43 goals and provide 19 assists along the way (per Transfermarkt).

Given how Liverpool said goodbye to Georginio Wijnaldum this summer after he saw out his contract at the club, it’s understandable why the Reds have been mentioned with a move for Saul given the vast experience he has of playing for Atletico domestically and in European competitions such as the Champions League, where he has made 59 appearances.

In our view, with Saul reportedly not happy with playing in numerous positions for Atletico as Jones mentioned, then it wouldn’t really benefit him making a move to Liverpool this summer if the same thing could happen to him there, as it has done with the likes of Jordan Henderson and Fabinho who played in the centre-back position for periods last season after injuries ravaged the Reds’ backline.