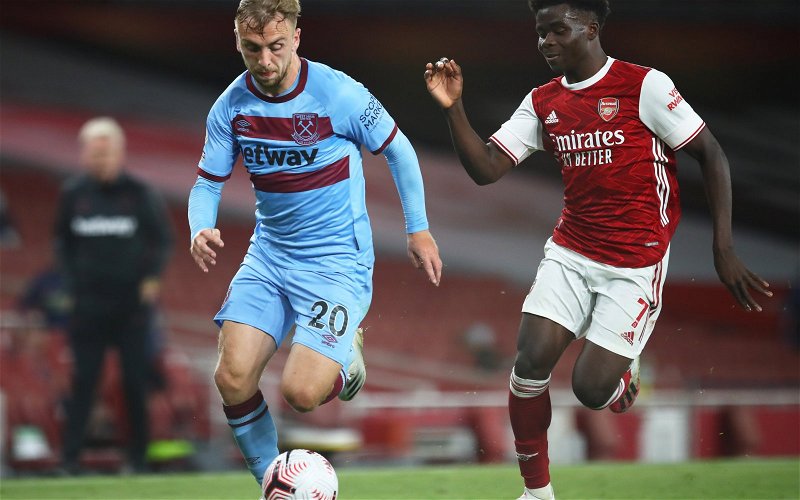 Liverpool journalist Neil Jones has been sharing his thoughts on the possibility of the Merseyside club making a move to sign West Ham United winger Jarrod Bowen this summer.

This comes after Jones made an appearance on a recent episode of The Redmen TV, where he spoke about a range of topics concerning Jurgen Klopp’s side.

After it was recently reported in the Liverpool Echo that the club could potentially be interested in signing Bowen, Jones had this to say on the matter.

He said: “I’m not saying that Bowen will happen.

“I think the story was pretty much clear that it’s a shortlist, and there’ll be a lot of other names on that shortlist, but I think it’s interesting enough that he’s one of them and it tells you a little bit about the type of player, but also, I think the profile of the player.

“You can draw up a decent line most of the time of the year with a Liverpool transfer rumour and say, well, does he fit this, this and this and Jarrod Bowen does in the sense of [he’s] young, versatile, can play in a couple of positions, not established as a star but with room to grow into it and pace as well and playing for a club that you feel like you could probably get him out of.”

West Ham signed Bowen back in the 2020 January transfer window from Championship club Hull City for a fee of £19.17 million.

Since then, the 24-year-old, who is currently valued at £27 million, has made 53 appearances for the east London club in which he has managed to score nine goals and provide 10 assists along the way (per Transfermarkt).

Taking into account what Jones had to say in the podcast about this latest report linking Liverpool with Bowen, it seems as though the West Ham figure is someone the club admires rather than actually getting ready to make a move for this summer.

Would you like to see Jarrod Bowen at Liverpool?

In our view, given how Liverpool already have a hefty number of attacking players in their squad that play on the wings such as Xherdan Shaqiri, Sadio Mane, Diogo Jota, Takumi Minamino, Mohamed Salah, Harvey Elliott and Harry Wilson, it does like a move for Bowen this summer may not be the most necessary move for the Reds unless they get rid of some of those players first.

Also, with David Moyes’ side having secured Europa League football for next season, it seems likely, in our view, that Bowen would want to be a part of that rather than being at Liverpool, where he may not be a regular starter.