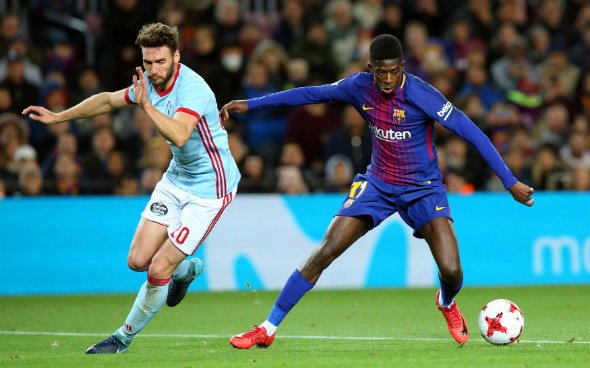 Barcelona are currently in a financial crisis after exceeding La Liga’s wage limit. As a result, talisman Lionel Messi is yet to sign a new contract – meaning he is a free agent – and new signings cannot be registered.

It has left boss Ronald Koeman in limbo and, having struggled with a number of injury problems, Dembele may be one of the players Barca are willing to move on.

Do Liverpool need to freshen up their attacking options?

Dembele, 24, is currently on the sidelines after being sent home from France’s Euro 2020 campaign early having sustained a knee injury against Hungary.

The winger reportedly has a €400million buyout clause in his Barcelona contract having joined for an initial £97m in 2017, but, with the club needing to get big-earners off the wage bill, it is thought they would be willing to accept considerable less.

McTear believes Anfield would be the perfect destination if boss Jurgen Klopp chooses to freshen up his attacking options.

Speaking exclusively to TIF, McTear said: “Liverpool are one of those teams that makes the most sense. They probably need to freshen up and I feel like Klopp would love everything about him, other than the injuries, obviously.

“He’s really hard to move on this summer when he’s just got an injury. It’s hard to convince your club to go and sign a player who has a history of missing more games for Barcelona than he has played.

“Liverpool are very smart when they’re doing their transfer business. But tactically, if he’s fit and healthy, I think he’d be a good fit.”