Many Leeds United supporters have been talking about the latest tweet from the club that emerged on Twitter.

The club’s official Twitter account recently posted an update for the fans, claiming that in partnership with the Supporter Advisory Board, the Whites have reviewed their policy for away tickets for the 2021/22 campaign.

A link on the club’s website claimed that the allocation of away tickets will be founded on rewarding away loyalty while allowing a wider fanbase to attend games. The maximum number of away fans allowed for Premier League games is 3,000. 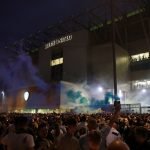 The policy will continue to be based on rewarding fans who regularly attend away games, with members who have attended 100 away games in the last five seasons guaranteed a ticket. The tweet about this update drew the attention of many Leeds fans, who began talking about this news.

What did LUFC fans make of this update?

“But keep selling memberships where folk who have been members for years and have the same chance of getting tickets as folk who have joined this year. Double standards…….any chance in reviewing this?”

“Absolutely devastated – just done a count and I am on 99.”

“Nightmare ! They need to round up.”

“I get that this solves the problem of loyalty, but it really does make the whole membership scheme seem a bit daft.“

“This is difficult to have a policy If you don’t allow season ticket / members the chance to get an away ticket then they have no way to actually start attending matches to build up attendance points..”
Credit: @AntDickinson
“Members getting 10% is still a joke tho.”
Credit: @george_lufc10

A lot of these Leeds fans don’t believe that this is a fair decision from the club, while some aren’t happy about the limit for away fans for next season.

Having said that, it is just a way for the club to reward fans who have followed the club during away games regularly, supporting them through thick and thin. In a way, the more faithful fans are being rewarded.

In other news: ‘He got lost’, ‘Looks disinterested’ – Many LUFC fans flock to transfer rumour