Journalist Fabrizio Romano has recently talked about the situation of Moise Kean and his future at Everton.

Romano appeared on the latest episode of the Here We Go podcast and gave some updates about the biggest transfer stories involving European football. He also talked about Everton forward Kean and his future at Goodison Park.

Should Kean be sold permanently? 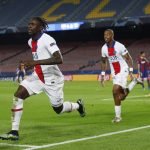 The journalist stated that while Paris Saint-Germain want him and they’ve made a loan offer for the Italian, Rafael Benitez has now got to make a decision because Carlo Ancelotti was willing to let the ex-Juventus man leave.

Kean had spent the 2020/21 campaign on loan at PSG, as he played 41 times in all competitions and scored 17 times for the club.

Romano talked about Kean and said: “Paris Saint-Germain want him. Someone was reporting a €40m bid – fake news. It’s a loan bid, they want him on loan for another season.

“But now it depends on Rafa Benitez because with Ancelotti, he was open to sending Moise Kean once again on loan to Paris Saint-Germain, but let’s see what Benitez wants to do.”

Going by Kean’s numbers at PSG, he certainly did have a good time in France, while playing alongside the likes of Neymar, Kylian Mbappe and Angel Di Maria.

Everton already have Dominic Calvert-Lewin and Richarlison as options for the striker’s position and this may make it tough for Kean to break into the team once again.

Kean’s form may well have seen his stock rise in the last 12 months or so. Therefore, perhaps Everton could make a profit from his sale, so selling him permanently may turn out to be a sensible choice.

In other news: “Everton have said to me” – Exclusive: Marcus Bent issues update on reported EFC transfer chase