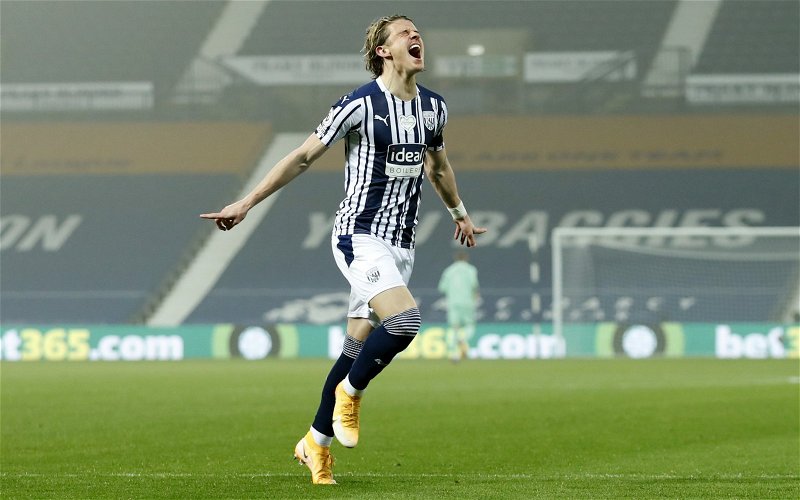 Dan Cook has been speaking on the HLTCO podcast about how serious of a transfer target Conor Gallagher is for Crystal Palace.

The Sun has claimed that he wishes to stay at Chelsea and prove to Thomas Tuchel that he is good enough to be part of the first-team picture this season, although that has not stopped links suggesting that both Palace and Leeds United hold an interest in the midfielder.

The 21-year old spent last season on loan at West Brom where he was a standout performer at the Hawthorns racking up a 6.63 WhoScored rating in his debut Premier League campaign but that may not be enough to make it at Stamford Bridge with the likes of Mateo Kovacic, Jorginho, N’Golo Kante and Mason Mount all achieving higher ratings last season.

Gallagher’s future is still up in the air and Cook discussed Palace’s interest in the midfielder on HLTCO.

“I believe that Conor Gallagher is someone that is still a big target for the football club, Leeds are credited with an interest in him and the suggestion is that we may have to wait a little bit longer in terms of in the window before we get a final answer from Conor Gallagher as to whether or not he is open to making a switch.

“Obviously, they are defending European champions now and they have huge amounts of quality running through that squad. It’s going to be difficult to force Thomas Tuchel’s hand so he may be forced to bite the bullet and decide upon another loan move.

TIF Thoughts on Gallagher being linked with Palace…

Seeing Palace linked with someone like Gallagher should come as no surprise considering the business they have conducted already this summer with signings such as Michael Olise (19), Marc Guehi (21) and Joachim Andersen (25) reportedly closing in on a move to Selhurst Park, so bringing in another young talent would certainly fit the mould that Patrick Vieira is searching for.

According to WhoScored, Gallagher likes to both tackle and dribble which would appear to be the perfect player as he can operate as a holding, central and attacking midfielder, giving Vieira a lot of options.