Steve Howey on whether James Maddison should join Arsenal

Leaving Leicester City for Arsenal would not be a backward step in James Maddison’s career, according to Steve Howey.

The creative midfielder has been linked with a move away from the King Power Stadium this summer.

Maddison made 42 appearances in all competitions last term but drew criticism from Foxes boss Brendan Rodgers after he – along with team-mates Ayoze Perez and Hamza Choudhury – breached Covid restrictions by attending a house party.

Would a move to Arsenal be a backward step in James Maddison's career? 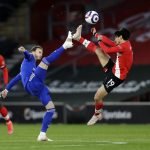 The breach led to Maddison being dropped from Rodgers’ matchday squad for the 3-2 defeat to West Ham United in April and he was made to settle for a substitute appearance in Leicester’s historic FA Cup final win over Chelsea a month later.

Reports suggest Mikel Arteta is interested in attracting Maddison, who would cost at least £70m, to the Emirates Stadium, but a move would see him miss out on European football next term due to Arsenal finishing eighth in the Premier League standings last season.

Former Leicester defender Howey insists that should not deter Maddison, 24, from completing a switch if the Gunners firm up their interest.

Speaking exclusively to TIF, he said: “Obviously players want to play in Europe but, let’s be honest, Arsenal are a huge club.

“It is a club that is looked upon as a prestigious club. The bright lights of London is also an attraction and I don’t necessarily think joining Arsenal would be a step down.

“Both clubs are really good and it just depends on what the player wants.”