Lots of Tottenham Hotspur fans have been reacting to a post on Twitter regarding the reported future of Gareth Bale.

According to The Athletic, Spurs were made aware a number of weeks ago that the Welshman does not intend on returning to the north London club for the 2021/22 campaign. 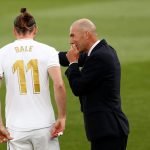 Bale made a sensational return to Spurs last summer on a season-long loan deal having left the club in 2013 for Real Madrid in what was a world-record transfer fee.

It was reported Spurs will have the first refusal on whether to bring Bale back for the 2021/22 campaign on the same terms, however, the 31-year-old has remained tight-lipped on his future.

Spurs fans flocked to the tweet from The Spurs Express relaying the claim on the Welshman’s future with the north London club from The Athletic to share their thoughts.

@toDAREis2DEAR
“The gutting news just continues. Words can’t properly cover how much I hate Daniel Levy”
@GarethSmith87
“Why would he? Joke club”
@Yearhhhhhhhhhh
“Yeah I’ll just cry”
@COYSonny7
“Can’t blame him, look at the mess this club is in and the way we treated him, he deserves better.”
@thfcj_
“Man I hate Jose for ruining the one season we had Bale back”
@ryan__thfc
“You can’t just blame him. Who would wanna come to this club?”
@ReeceWilkinson_

The Welshman struggled for consistent game time under former manager Jose Mourinho but did end the campaign with 11 goals and two assists in the Premier League (via Transfermarkt).

The reaction of these Spurs fans makes it pretty clear they are incredibly disappointed to hear Bale is reportedly not intending on returning to Spurs for the 2021/22 campaign despite only making 20 appearances in the Premier League last campaign.