The Daily Record has recently stated that Celtic are looking to bring Maloney back to the club, with the appointment of Fergal Harkin now looking unlikely. Maloney could be part of the club’s rebuild and he may join the side after his commitments at Euro 2020 with Belgium.

Provan appeared on the latest episode of the Go Radio Football Show and he gave his views about the potential return of Maloney. Provan had a lot of praise for the Scotsman, saying that anyone that he’s spoken to has good words to say about Maloney.

Should Celtic bring Maloney back? 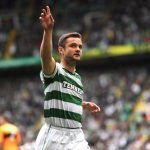 The ex-Celt said: “I would like to see him back at Celtic. I think he’s a really clever boy. Obviously, he was an exceptional talent as a player. And I think the intelligence he showed on the pitch, I think he’s taken off the pitch as well in terms of his coaching career. Anyone I speak to speaks highly of Shaun Maloney. I think he would be a really good acquisition.”

Maloney is currently part of Roberto Martinez’s coaching setup at the Belgian national team, who had reached the World Cup semi-final under the duo in 2018.

Provan too suggests that Maloney is highly rated by people in the game and he certainly has previous connections with Celtic as a player and as a coach. He’s still only 38, which is quite young for a coach.

So if Maloney does return to Celtic in a coaching capacity, that might only help the club in the future.

In other news: ‘The plot thickens’, ‘Winding me up’ – Many Celtic fans left fuming as new candidate emerges