Journalist Fabrizio Romano has reported about Edouard’s future recently, stating that Premier League side Leicester City are in advanced talks to sign the Frenchman from Celtic. The Foxes are said to be keen on completing the deal quickly, as other clubs are also interested.

Joseph was speaking on the latest episode of the Only As Good As Your Last Game podcast and was asked about the situation of Edouard and his links with a move to the King Power Stadium.

Can Celtic earn more than £15 million from Edouard's sale? 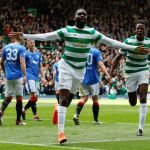 The journalist revealed that Celtic have been holding out for a higher fee and it wouldn’t be a problem for Leicester to match it. He stated that only initial discussions have taken place so far.

The Sky Sports reporter claimed: “They’ve certainly held constructive talks, Leicester and Celtic, regarding a deal. Leicester were originally wanting to get him [for] around £15 million, but Celtic look to be holding out for around £18 million, which is fine – I think it’s fine for Leicester as well.

“There’s been initial discussions. Rodgers would love to link up with Edouard again, he was so successful with him, helped him progress.”

Because of the fact that Edouard’s contract at Celtic runs out in the summer of 2022, they’d have to sell him this summer without risking him leaving for free next year.

However, the Frenchman’s former club, Paris Saint-Germain, have a sell-on clause in the deal and they’d get a percentage of the fee from the transfer. Due to that, Celtic’s margin for profit may decrease quite a bit.

And if they want to maximise their profit, they’d certainly want to demand a higher fee from Leicester to let Edouard go. So it does make sense that they’re holding out for the £18 million price tag as Joseph reports.