Craigan appeared on the latest episode of the Go Radio Football Show and talked about multiple issues involving the Scottish game. He spoke about Celtic’s potential summer transfers and this led to him talking about Ralston and his future at the club.

It was reported recently that Ralston will be handed a new contract at Parkhead, even though clubs from the Premiership and Championship are interested in him.

Do you expect Ralston to play next season? 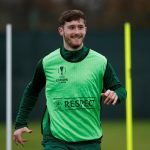 Craigan believes that while this may be because Celtic don’t have another right-back, it is a chance for Ralston to prove himself to new boss Ange Postecoglou.

He claimed: “At the minute, they’ve got Tony Ralston, who extended his deal by a year. He must be 22-23, and if you’re not an established Celtic player at 22-23, you wonder if it’s ever going to come.

“It seems a shame probably to say it, but has he been signed for a numbers game, because you don’t have another right-back at the club? So if they want to start pre-season games, they need someone to play in that position.

“Ultimately for him, it may not be ideal, but it gives him another opportunity to go and show the new manager what he can do. So he’s got to make sure that he goes and grabs it.”

Ralston happens to be Celtic’s only out-and-out option at right-back and considering that the Scotsman played only once in the Premiership last season, the Bhoys may need more depth in that department soon.

But the Hoops have to play their pre-season games from early next month and they may not be able to sign someone else by then. And if that’s the case, Ralston would have to play at right-back and add cover until someone else comes in – so pre-season will be a big chance for Ralston to prove himself.

In other news: ‘They’ll be getting a good, solid player’ – Barry Ferguson reacts as Celtic rumour emerges