Pundit Natasha Meikle has recently criticised Celtic for the manner in which they’ve dealt with the situation of Kristoffer Ajer.

Ajer has recently made it clear that he’d like to leave the club this summer and it has been reported that Bundesliga side Bayer Leverkusen are in talks to sign the Norwegian as well.

Ajer’s representatives, though, had made it clear as far back as last summer that he was looking to leave, only for the defender to remain at the club.

Have Celtic dealt with Ajer's situation in the right way? 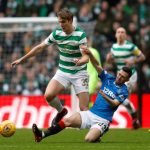 Meikle appeared on the latest episode of the ‘A Celtic State of Mind’ podcast and she talked about Celtic’s dealing of Ajer’s situation. She feels that if Celtic knew about Ajer’s desire to leave since last summer, they should have replaced him already.

She stated: “We can talk about the players individually – Ajer, he said that he wanted to go last season. We obviously persuaded him to stay in an attempt for ten in a row – that didn’t happen.

“But we then knew that we’d have to make good on that promise, the club must have absolutely known that Ajer was going to leave this year, so that we have to find a replacement. That doesn’t appear to have happened.”

Celtic are yet to sign a single player on a permanent basis this summer, but they are said to be in talks to sell Ajer and Odsonne Edouard.

If Ajer departs, young Stephen Welsh could be Celtic’s only fit out-and-out centre-back option and it shows that the club perhaps hasn’t planned things properly – especially if they knew about Ajer’s potential exit over the last year.

In other news: Sky Sports journalist’s Laxalt news has got a lot of Celtic fans talking