Many Celtic supporters have been discussing a news update regarding Ryan Christie that emerged on social media.

The Daily Mail (via The Sun) have reported that Leicester City are interested in signing Christie and Brendan Rodgers has enquired about the availability of signing the midfielder. The Foxes are reported to face competition from French side Nice, who have already had a bid turned down by the Hoops.

Would you want Christie to join Leicester? 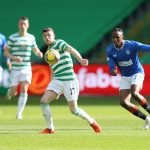 Southampton are also interested in the Scotsman and they are said to be eyeing a cut-price deal for the midfielder. Christie’s current contract at Parkhead runs out in the upcoming January transfer window and a move abroad appeals to him.

The news regarding Leicester’s interest in Christie drew the attention of many Celtic fans, who made their views clear about this update.

What did Celtic fans make of the Christie news?

“My car has a full tank and I am free to drive him to Leicester no problem.”

“See? He does have our best interests at heart. Thanks Brendan.“

“Leicester are welcome to him. He was great a couple of seasons ago, but last season (like most in the squad) was garbage. Would be good for the lad and the club if he moved on.“

“Could we swap him for Jamie Vardy.”

Rodgers departed Celtic in February 2019 and fans have been angry about the fact that he departed the club mid-season.

Christie shone under Rodgers, contributing to 21 goals in all competitions for the Hoops. So there might be an understanding there and if he does go to Leicester, the move may only help him improve as a footballer.

In other news: ‘Yes, yes, yes’, ‘Hope this is true’ – Many Celtic fans excited as ‘huge’ transfer news emerges