Celtic fans on Facebook have been responding to the latest comments made by former Hoops manager Neil Lennon.

During the podcast, Lennon said that the “new culture” of fans at Celtic are “greedy” and “complacent”.

Lennon also said that the fans have “chased” club chief executive Peter Lawwell “out the door” and “gone after” Dermot Desmond, who “have done nothing but try to bring success to the club.”

This post then gathered a number of replies from Hoops supporters, who were not shy in sharing their thoughts on what Lennon had to say.

So, what did these Celtic fans have to say in response to these comments from Lennon? 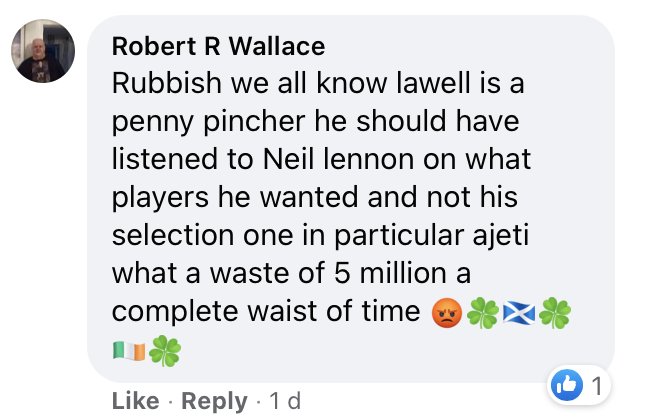 Looking at the replies to this post, it seems that this group of Celtic fans are not particularly welcoming or accepting of these comments from Lennon.

Do you agree with Lennon's comments?

Given how Lennon walked out on the club back in February during the season that ultimately saw Celtic fall behind Rangers at the top of the SPFL table by 25 points, it’s understandable, in our view, why these Hoops fans are quick to dismiss the former manager’s comments.

Moving forward, if Celtic can have a better season under new manager Ange Postecoglou than they had under Lennon’s guidance before his departure, this would be a good step forward for the club and fans to put the last season behind them.

In other news: ‘Has no respect for the club’ – Many Celtic fans react to news on ‘terrible’ club figure