Pundit Barry Ferguson has recently talked about George Baldock and Celtic’s links with a move for the Englishman.

It was recently reported that Celtic have Baldock on their shortlist, even though the Hoops have many names on the list. They wanted to sign the right-back two years ago in an attempt to replace the then-outgoing Mikael Lustig.

Ferguson featured on the latest episode of the Go Radio Football Show podcast and discussed potential transfers in the Scottish Premiership this summer. He also gave his views about Celtic’s interest in Baldock. 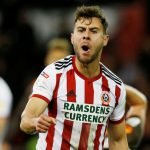 Ferguson stated that he can see why Celtic are interested in Baldock, as he believes he would be a solid addition to their side.

He said: “One player that has stuck out has been George Baldock. He’s been always a steady Eddie on that right-hand side for Sheffield United and I can see the reasons why Celtic are interested in him. They’ll be getting a good, solid player, that’s for sure.”

Baldock has quite a bit of experience of Premier League football and he’s played a lot of games in the Championship too, which shows that Celtic would be getting an experienced campaigner.

In his career, the 28-year-old hasn’t just played on the right side of the defence but has also played at centre-back as well as on the left occasionally, which showcases his versatile nature as a player.

Celtic could be dealing with multiple departures this summer and that would make a player like Baldock very useful. He’s experienced and can play various positions, so the Englishman would be a good signing if Celtic can afford him.

In other news: ‘Yassssss’, ‘About time’, ‘Big Ange says no’ – Some Celtic fans buzz over update