The Hammers are said to be interested in signing Lingard on a permanent basis and there is said to be ‘optimism’ regarding a potential deal, even though Manchester United are expected to demand a high price for the Englishman.

Luckhurst appeared on the latest episode of the Manchester Is Red podcast and he talked about potential Man United exits this summer. He also discussed the future of Lingard, claiming that even though the midfielder is expected to be sold this summer, he’s yet to talk to Ole Gunnar Solskjaer about his future.

Should West Ham move on from Lingard? 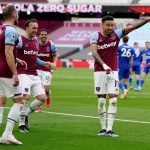 Luckhurst believes that the decision for United might be obvious and Lingard needs to be sold. He said: “Jesse Lingard though is someone who you’d think is absolutely going to be sold this summer, but there has still not been any clarification on that as of yet.

“And it’s a case of waiting until he goes back to Carrington next month and having a chat with Solskjaer and a decision being made. But you’d think that decision is pretty cut and dry that he needs to be sold.”

Lingard had an impressive 2020/21 campaign for the Hammers, as he scored nine times and grabbed five assists.

While this shows that he’d be a player worth signing for the Hammers, his performances did dip towards the end of the season, despite having missed just 15 minutes of action (aside from the fixtures against Manchester United) since his debut, such was David Moyes’ apparent reluctance to replace him on the field.

That he was unable to sustain his form in the last few weeks could be a reflection of his inconsistencies as a player and if United demand big money for him, the Hammers might want to move on from Lingard.

He’s currently 28 and his contract runs out in the summer of 2022, so West Ham shouldn’t necessarily go over the top to sign the player permanently.