ExWHUemployee has been speaking on the latest edition of The West Ham Way podcast about West Ham United’s new kit and when it could be released.

West Ham’s Premier League season starts on 15th August, but the Hammers have still not revealed any information regarding their kits for the upcoming 2021/22 campaign.

However, it looks like one of those kits could finally be released on Friday, though Ex made it clear that he was not certain.

He said: “I think one of the kits, probably the away kit, will be released this Friday.

“The home one is the Di Canio one against Wimbledon, but I’m pretty sure it will be the away one, but it’s not definite it’s going to be released.

Do you think West Ham will release a new kit on Friday? 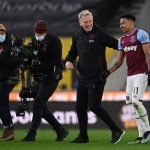 When new kits start to be released, we always get excited as it means the next Premier League season is edging closer, and before long, we will have pre-season friendlies.

So we hope that Ex is right and West Ham do release their away kit on Friday ahead of a potentially memorable season for the Hammers.

David Moyes’ side qualified for the Europa League, so there could be some fantastic European nights in store for the Hammers this season, and the release of a new kit means those moments are edging closer.

We will have to see what happens, but we will have a close eye on West Ham’s Twitter feed on Friday to see if this new kit is released.

In other news: ‘The latest is a guy called’ – Ex reveals West Ham ‘interest’ in £22.5m-rated star