Peterborough Director of Football Barry Fry has told This is Futbol that he expects West Ham United and Everton target Ivan Toney to attract some big clubs and fees this summer.

Fry allowed the striker to leave for Brentford following Posh’s failure to get promoted in the 2019/20 campaign. 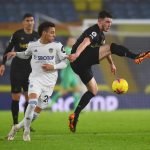 And Toney enjoyed an exceptional first full season in the second tier, scoring 31 goals which saw him break Glenn Murray’s previous record of most goals in a single Championship campaign, before adding two more in the play-offs to ensure they will play in the Premier League for the first time ever.

It remains to be seen whether the 24-year-old will stick with the Bees in the top-flight or move on to a bigger club, given he’s attracted interest from several Premier League teams.

Top six contenders Arsenal, Leicester, Everton, and West Ham are amongst those reportedly keen on adding Toney to their attacking ranks.

Leeds are also keeping a close eye on the Brentford man, who’s reportedly going to cost around £30m.

It remains unclear where Toney’s future lies, but Fry has exclusively told This is Futbol that his former striker is set for a big summer:

“He’s that good. I think big clubs and more will pay a lot, a lot, a lot of money for him and he will have a better chance of winning the Golden Boot.”