One name which Romano brought up was Norwich City defender Max Aarons, who has been linked with a potential switch to the north London club in past windows. 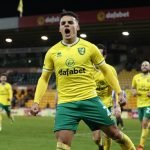 The Canaries have been promoted to the Premier League ahead of next season having won the 2020/21 Championship.

However, the club has admitted they are open to selling any of their players if the right price is put forward for the individuals.

The £18m-rated defender made 45 appearances in the 2020/21 Championship campaign and added two goals and five assists to his name in those games (via Transfermarkt).

Discussing Tottenham’s interest in the right-back, Romano had the following to say on the matter:

“And let’s see, but for the players, you need to wait for the [new] manager, of course.”

The reported interest in Aarons from Spurs would make a great deal of sense given their defensive struggles experienced in the 2020/21 campaign.

Recently, Serge Aurier has admitted he would be open to a move away from Spurs this summer and Matt Doherty has failed to live up to expectations in his first season with Tottenham.

Aarons already has a season of Premier League experience under his belt, however, Spurs remain without a permanent manager who may come in with his own transfer targets. Therefore, it is unclear, as Romano suggests, whether their previous interest in the full-back will resurface.