Lots of Tottenham Hotspur fans have been reacting on Twitter to a transfer claim to emerge ahead of this summer’s window.

According to Fabrizio Romano (via Chris Cowlin), Mauricio Pochettino is still interested in signing Dele Alli for Paris Saint-Germain. 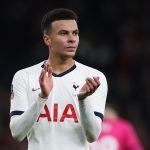 The Tottenham star was linked with a potential switch to the French capital during the winter transfer window following Pochettino’s arrival at PSG.

Despite a move falling through in the end, the transfer expert still believes a move to Paris could become an option for Dele Alli this summer.

Spurs fans flocked to a tweet from Hotspur Related relaying the claim from Romano and it was apparent they would be open to the idea of the Englishman being sold.

@Tottenham_Danny
“First good news in a while”
@ReguilonEra
“Levy refused to sell him for 35 million pounds in Jan And right now nobody is ready to pay 15 million for him LEVY MASTERCLASS”
@71_maaraj
“OMG PLEASE”
@tanguythings
“Can’t have him.”
@terrygeorgina1
“Finally some good news”
@mightguy35
“OMDD”
@Baleinator
“Don’t sell Dele”
@JoshJ93

The 25-year-old was only able to make 15 appearances in the Premier League during the 2020/21 campaign in which he failed to score and only recorded one assist (via Transfermarkt).

Going by the reaction of these Spurs fans, it is clear that most would be open to selling Dele Alli this summer, but it would have to be the right price as some fear further embarrassment.