Tottenham Hotspur fans have been reacting to news from Alasdair Gold surrounding the future of Serge Aurier.

It would seem as if the 28-year-old’s time at the club is in the process of coming to an end, as Italian journalist Rudy Galetti has claimed that he is close to making a move to Paris Saint-Germain soon in a €20m (£17.2m) deal, making a return to his former club and reuniting with former Spurs boss Mauricio Pochettino in the process.

Writing in an article for Football.london, Spurs insider Gold claims that should the deal go ahead, the club will “quickly put plans in motion to sign a new full-back to replace him” – news which might not sit too well with Matt Doherty, who battled it out with Aurier to be the starting right-back last season, so looks like he may have some more competition in 2021/22.

The news was relayed to fans via @TheSpursExpress on Twitter for fans to discuss, but there didn’t seem to be much enthusiasm that the club would actually be able to do the deal quickly and in a suitable manner:

“Surely plans should be in motion for a replacement given that the player clearly isn’t good enough. Get him out, get him replaced and get a move on”

@g2mcc
“We never, ever do anything quickly, ever, we conclude our transfers over months & months, it’s frankly embarrassing.”
@jjbiggsy
“It will be the usual painful transfer window where everything is dragged out.”
@DarrenR28
“I mean this idea wouldn’t be news at any other club but here we are”
@The_Gekkota
“Wow, brave and insightful thinking from those who run the club lol”
@ZackTuke
“Day ruined”
@ODT413

Should Aurier leave in the summer? 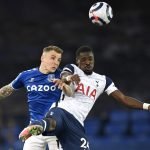 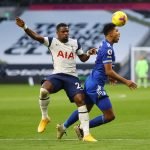 Perhaps they have been blinded by what has gone on in the past, but with new man Fabio Paratici now in charge, perhaps things could change and reinstall the fans’ faith in the club.

In other news: ‘ENIC in a nutshell’, ‘Mocking it now’ – Many Spurs fans livid as Joe Lewis & Levy news emerges